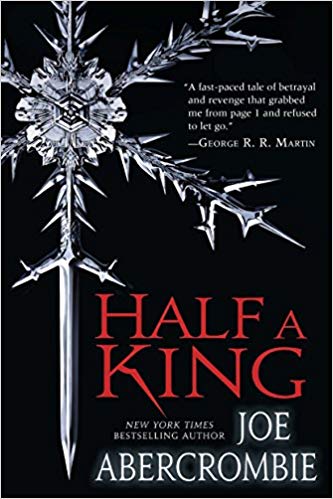 Half a King (Shattered Sea) by Joe Abercrombie (Paperback)

“A fast-paced tale of betrayal and revenge that grabbed me from page 1 and refused to let go.”—George R. R. Martin

“I swore an oath to avenge the death of my father. I may be half a man, but I swore a whole oath.”

Prince Yarvi has vowed to regain a throne he never wanted. But first he must survive cruelty, chains, and the bitter waters of the Shattered Sea. And he must do it all with only one good hand.

The deceived will become the deceiver.

Born a weakling in the eyes of his father, Yarvi is alone in a world where a strong arm and a cold heart rule. He cannot grip a shield or swing an axe, so he must sharpen his mind to a deadly edge.

The betrayed will become the betrayer.

Gathering a strange fellowship of the outcast and the lost, he finds they can do more to help him become the man he needs to be than any court of nobles could.

But even with loyal friends at his side, Yarvi finds that his path may end as it began—in twists, and traps, and tragedy.