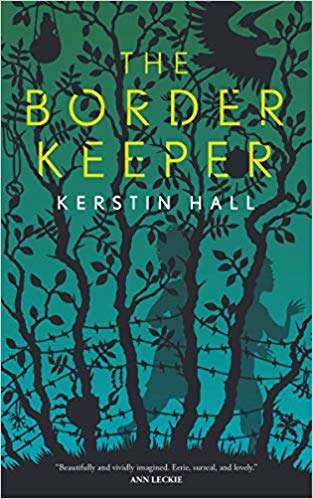 "A phantasmagorical picaresque through a lushly realised underworld, populated by a grotesque bestiary of fantastical creatures. . . . This twisty example of the new weird genre examines love, loss and loyalty, packing skilful world-building and a powerful emotional punch into a little over 200 pages."―The Guardian

She lived where the railway tracks met the saltpan, on the Ahri side of the shadowline. In the old days, when people still talked about her, she was known as the end-of-the-line woman.

Vasethe, a man with a troubled past, comes to seek a favor from a woman who is not what she seems, and must enter the nine hundred and ninety-nine realms of Mkalis, the world of spirits, where gods and demons wage endless war.

The Border Keeper spins wonders both epic―the Byzantine bureaucracy of hundreds of demon realms, impossible oceans, hidden fortresses―and devastatingly personal―a spear flung straight, the profound terror and power of motherhood. What Vasethe discovers in Mkalis threatens to bring his own secrets into light and throw both worlds into chaos.

Praise for The Border Keeper

“A labyrinth of demons, dead gods, cranky psychopomps, and broken all-too-human lives. Hall is by turns wry and lush, genuine and venomous. So can I have the next one already?”―Max Gladstone