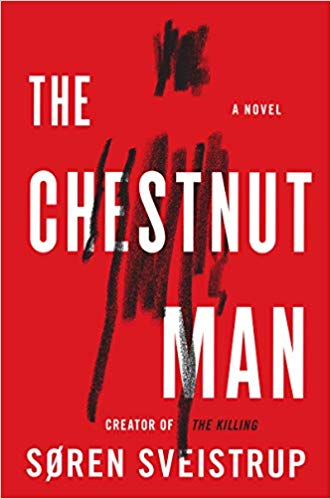 The Chestnut Man: A Novel by Soren Sveistrup (Hardcover)

FROM THE CREATOR OF THE HIT TELEVISION SHOW THE KILLING, THE MOST ANTICIPATED THRILLER OF THE SEASON—SOON TO BE A NETFLIX ORIGINAL SERIES.

IF YOU FIND ONE,

A psychopath is terrorizing Copenhagen.

His calling card is a “chestnut man”—a handmade doll made of matchsticks and two chestnuts—which he leaves at each bloody crime scene.

Examining the dolls, forensics makes a shocking discovery—a fingerprint belonging to a young girl, a government minister’s daughter who had been kidnapped and murdered a year ago.

A tragic coincidence—or something more twisted?

To save innocent lives, a pair of detectives must put aside their differences to piece together the Chestnut Man’s gruesome clues.

Because it’s clear that the madman is on a mission that is far from over.

And no one is safe.