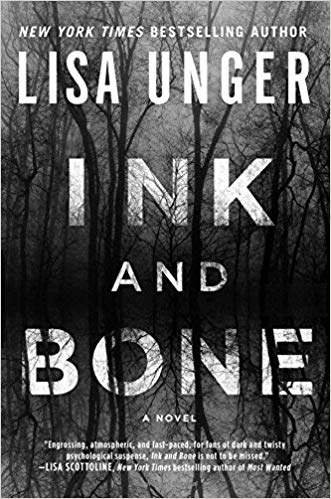 Ink and Bone: A Novel by Lisa Unger (Hardcover) USED

"For fans of dark and twisty psychological suspense, Ink and Bone is not to be missed." (Lisa Scottoline, New York Times bestselling author of Most Wanted)

Twenty-year-old Finley Montgomery is rarely alone. Visited by people whom others can't see and haunted by prophetic dreams she has never been able to control or understand, Finley is terrified by the things that happen to her. When Finley's abilities start to become too strong for her to handle--and even the roar of her motorcycle or another dazzling tattoo can't drown out the voices--she turns to the only person she knows who can help her: her grandmother Eloise Montgomery, a renowned psychic living in The Hollows, New York.

Merri Gleason is a woman at the end of her tether after a ten-month-long search for her missing daughter, Abbey. With almost every hope exhausted, she resorts to hiring Jones Cooper, a detective who sometimes works with psychic Eloise Montgomery. Merri's not a believer, but she's just desperate enough to go down that road, praying that she's not too late. Time, she knows, is running out.

As a harsh white winter moves into The Hollows, Finley and Eloise are drawn into the investigation, which proves to have much more at stake than even the fate of a missing girl. As Finley digs deeper into the town and its endless layers, she is forced to examine the past, even as she tries to look into the future. Only one thing is clear: The Hollows gets what it wants, no matter what.