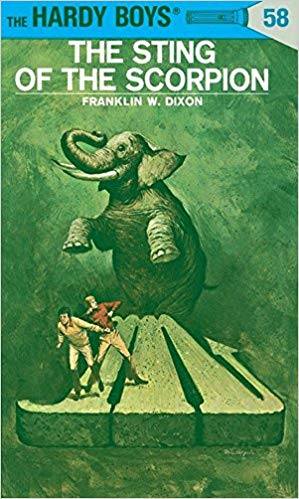 Hardy Boys 58: The Sting of the Scorpion (The Hardy Boys) by Franklin W. Dixon (Hardcover) USED

During Mr. Hardy’s investigation of a ruthless gang of terrorists, Frank and Joe witness an explosion in the sky near an airborne dirigible owned by Quinn Air Fleet. The young detectives look into a clue that takes them into a new animal park outside Bayport, where they are lured into a trap by an unknown enemy. Problems arise for the park owner as he receives pressure from a competitor and a real-estate firm to sell out. Strange occurrences at the park also frighten the visitors and animals. Frank and Joe take up the case despite fore warnings.